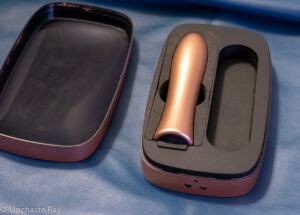 This thing has weight. I can probably use it as a home-defense weapon if I keep it on my nightstand in case of intruders. On top of it having weight, this toy can vibrate. Off the cuff, the vibrations with this toy are very strong. As I mentioned, this toy is a pricey toy, and it feels worth the price.

The charging/storage case, although not made out of aluminum as well, matches the Bougie Bullet in color. The case itself has the charger contacts built in; this way, you can keep the bullet stored and charge it at the same time without it having to leave its case. This is great, because when I charge all of my toys in their charging station, I have to pull all of them out of their cases. 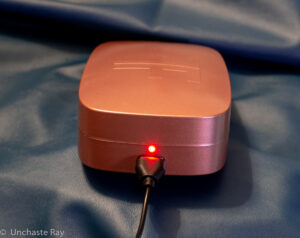 This toy claims it’s quiet, and it is indeed quiet. I would not say whisper quiet, but it is quiet enough that no one in a different room is going to hear it. I got a sound meter a while back, but I have never gotten around to use it—it’s not exactly accurate. But when I do get one, I will make sure to work on measuring all of my toys that make noise.

For this part of my review, my [female] partner put in the effort for this review. I feel like the one who could take more advantage over this bullet would be my female partner.

I love using it. It’s discreet; in the sense that you can’t really tell what it is. Unlike those bright pink bullets that are obvious from a mile away. It is powerful enough for my needs. If it was too powerful, then that would just be painful to use. It does get there if you select the highest vibration setting and that lightning bolt icon, which increases the intensity even more. The vibrations from this toy are high in frequency, but its not those annoying buzzy vibes. I also wouldn’t say that it is deep vibrations either—it’s actually a really good in-between. I did not use lubricant, since I wasn’t using it to insert. I prefer to use it on the outside, not really a fan of sticking bullets inside of me. 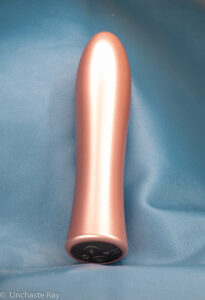 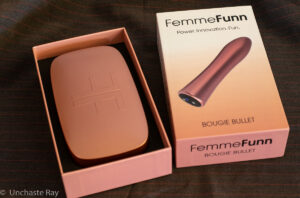 It is strong. The solid construction of the bullet vibrator convinces me that it will last for a very long time. FemmeFun does offer a one-year warranty which is great, though I wish it could be longer just to guarantee the fact that this toy is a solid piece of vibrating metal. The only turn-off is the fact that there is no up and down buttons to cycle through the different vibration modes. I rarely ever use vibration modes on any vibrating toy. So if I’m using the bullet, and I accidentally change the mode, it’s a pause that will break my concentration for just a moment to change it back to how it was. Keep in mind that this is a luxury-end toy, and it is worth the price you’re paying for. The solid construction will be giving you orgasms for a long time [I hope].