Discontinued by Manufacturer
This item has been discontinued. It is no longer available by the manufacturer and is probably not sold anywhere. If you find it anywhere, it’s being phased out and whatever stock is left, is all that’s left.

I love butt plugs. Almost every butt plug I own is silicone or metal and does not vibrate. Just recently, I got the amazing opportunity to try a wireless butt plug. I’ve tried a regular vibrating butt plug, but this would be my first wireless plug to try.

The B Swish Bfilled plug was given to me free of charge from B Swish for review. My review and opinion are completely honest. Thank you B Swish for the opportunity. 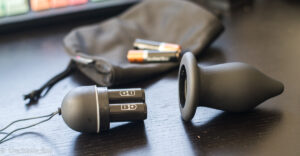 The second thing that caught my attention was the fact that this toy requires four AAA batteries. I’m very much spoiled in expecting every single sex toy to be using rechargeable batteries; requiring regular alkaline batteries isn’t a bad thing (but it might be a deciding factor for some). Both parts of the toy are very easy to open by simply twisting the base of the plug and the remote to insert the batteries.

The wireless plug and remote combo comes with a cloth storage bag. I can make sure that I will never lose the plug nor the remote. This is a great idea and I believe every sex toy should come with their own storage bag. 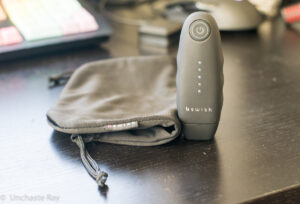 Insertion is pretty easy. The plug is on the small side and is easy to use with lube. When I tried to use the plug, it simply would not stay in. The lack of the groove in the plug is the fatal flaw which prevents the plug from staying in. I feel like the whole point of a wireless butt plug is to be used while walking around, it should stay in by itself. I should not have to be holding it in with my hand. Due to this fact, the plug is basically useless.

I tried using the plug for vibration purposes, but just holding it in manually is a big turn-off. The vibrations do travel into my butt, but they don’t hit my prostate due to the short nature of the plug.

I want to like this plug. It’s a great concept, the remote is really responsive and it has a decent range. However, the design itself is flawed. As with most plugs, a butt plug must have a narrow-ish neck or “groove” for the sphincter muscles to hold the plug in place. The Bfilled plug has no grooves at all — the plug has no neck causing the sphincter muscles to stay open and not really “close” around anything.

I feel like the whole point of a wireless butt plug is to be used while walking around, it should stay in by itself. I should not have to be holding it in with my hand. 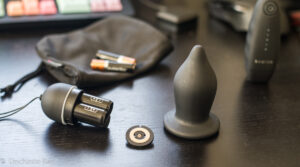 I don’t recommend using boiling water to sanitize the plug as ABS plastic is rated to go only up to 172° according to the ABS plastic MSDS.

If you are using the plug for your use only (and not sharing with others), you can use soap and water and give it a really good wash.

The B Swish Bfilled wireless butt plug is a plug that has so much potential, but falls short. The lack of the [sphincter] groove does not allow it to stay in by itself meaning that I am unable to effectively use it. Usability aside, the material (ABS plastic) is great and the wireless range is decent. I could not recommend this plug due to the fact that it is unusable without outside interference.