I don’t have the anatomy necessary to use the Satisfyer Pro. The Satisfyer series of toys are clitoris stimulators. For this reason, I had my partner use these toys. For the most part, this review is written mostly by her.

The Satisfyers were given to me free of charge by the Satisfyer company themselves! This fact does not change or sway my opinion in any way. Thank you Satisfyer!

The Satisfyer Pro 2 (and Satisfyer Penguin) both work by suction. The Satisfyer head sits over the clitoris and is meant to stay in place. The silicone cap “encloses” the entire clitoris to maximize its effect. The effect of the Satisfyer is not vibration, but a pulsing suction. It’s very satisfying. It’s the first toy to ever make me wet the bed. Alot. All over the place. But more on that later.

The Satisfyer Pro 2 is the full-size flagship product of Satisfyer. The Penguin is a small version that is easy to use for some. 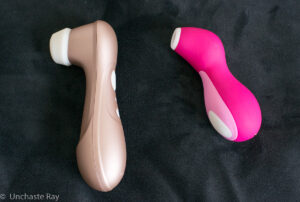 First key point between the Satisfyers: The Satisfyer 2 (no “Pro” here) is battery operated. All of the other Pro models have a rechargeable battery.

The body of the Satisfyer Pro 2 is made from ABS plastic. The business end of the Satisfyer is made from soft-ish silicone. The cap is conveniently removable which is great! So far, I’ve been washing it with soap and warm water after every use—but I feel that occasionally, I might sanitize it just to be 100% clean. I won’t ever share it with someone else [which in that case, sanitize after every use], but it’s great to have the option there. Did I forget to mention that the Satisfyer Pro 2 and the Penguin are waterproof? They can go in the bath (which I’ve done before) and had no problems. Because of this, the charger is of the magnetic type. The fact that there’s no port or plug of any type in the toy itself means I don’t have to worry about water getting in there.

At this point in the review, I must point out that I honestly hate lube. In general. I know that I am a minority here, but I just don’t like the icky sticky feeling on my body. So, I wouldn’t be able to tell you how the Satisfyer feels with lube. Though I have heard it may or may not enhance your experience. Your mileage may vary.

I’d like to state at this moment that I am the type of person that really likes clitoral stimulation.  Using vibrators that are insertable aren’t really my thing and that is why I love this toy. It’s The Reason as to why the Satisfyers (Pro 2 and Penguin) are some of my favorite toys to use, the single intention to satisfy the clitoris. These two toys are together with some of my other go-to’s that I keep by the nightstand.

The Satisfyer satisfies me a bit too much. It makes me reach orgasm pretty darn quick. But this is only if I want it to. If I really wanted to, I can reach orgasm in less than a minute. But, for the most part, I like taking it purposefully slow. I feel that this way, I can make the most out of the stimulation—this is the type of orgasm I can truly enjoy. Using this toy, I have found that I don’t have to move the toy at all. I can keep it on my clit and I don’t have to rub it back and forth or have to angle it some weird way so that my clit can feel good. 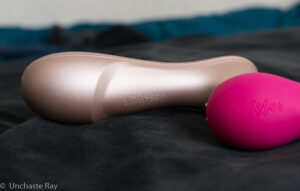 A real con is the controls. They aren’t exactly as user friendly as I want them to be. There is only the power button and one control button. That means to turn it back down, you have to go all the way up first to the highest setting. Who designs a sex toy like that?! Almost every vibrator that I own has “volume” type of controls: one up (higher) button and one down (lower) button. This is extremely disappointing and a huge turn off for me. After reaching my first orgasm (yes, first), I want to go down to a certain intensity, but I can’t! Because I have to go higher first, but I don’t want to move the toy and I don’t want to go up to a higher intensity, it can hurt! What I aim to do is slowly ease out of an orgasm—I don’t want to just abruptly stop.

I am really liking the Satisfyer Pro 2 and the Satisfyer Penguin. The Pro 2 comes in at around $70 and the Penguin just a bit cheaper. I love the orgasms they have given me—at the price point that these come in, they are certainly a must-have.