The Vice device is the first chastity device that I know of that has an anti-pullout system integrated in its design. When practicing chastity, the keyholder should make it a goal that the chastized cannot escape or defeat the chastity device that they are wearing. For most off-the-shelf devices, it is possible to defeat the device—having an anti-pullout is a necessary feature for some users.

For those not familiar with chastity, chastity is [usually] practiced with a partner. The person that is locked fully surrenders to the partner. The keyholder (named that because this person holds the key to the lock) controls the person that is chastized. The person wearing the device must obey and listen to what the keyholder says. Most types of relationships where chastity is being used are D/s types of relationships.

I received The Vice free of charge for the purposes of reviewing it. This fact does not change nor sway my opinions. 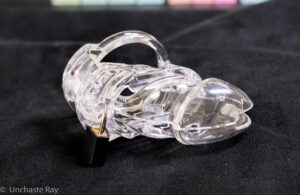 When I first got The Vice, I immediately thought of the CB-6000. The design is very reminiscent of the CB-6000. The fact that there are multiple sizing rings and spacers included seems eerily similar. Not only that, the type of plastic used in The Vice seems to be almost the same.

I really like that once you buy The Vice, you get all of the spaces and rings all at once. This is in contrast to a certain popular off-the-shelf device where each ring costs extra. Having a perfect fit with a chastity device is crucial—a chastity device must be comfortable so that it can be worn for long periods of time. A while ago I purchased a Mature Metal device, but I ordered it the wrong size. Because of this, I have been unable to use it until I pay to have it resized. Having all of the sizing rings included would’ve been amazing when I spent about $400 on a custom chastity device.

The material of The Vice seems very light. I can’t help but get a “cheap” feeling from this type of material. It seems to me that the plastic can be broken if I’m rough with it. Obviously, this isn’t a con and I am definitely not saying that it is [cheap]; this is just an observation. If you were to compare the build quality to the Holy Trainer v2, it feels like I can break The Vice by just stomping on it whereas the HTv2 will survive me hitting it with a hammer. If you are not hitting the device with a hammer, then it’s definitely a good thing since that means it’ll be light while being worn. Although everyone has different preferences, I highly appreciate the fact that it’s light. The lighter material gives me more of a I-am-not-wearing-anything feeling.

The tube is intended to be worn for long periods of time. There are significantly more openings than any other off-the-shelf plastic device that I have owned. In long-term use, the openings are crucial. Maintaining the penis clean prevents any possible health issues. Having a tube enclosing the penis at all times prevents the skin from breathing. Any moisture trapped in the tube can potentially exacerbate the chances of getting an infection. So the open vent holes in a plastic tube are pretty great. If  you were to compare the tube to the HTv2, The Vice wins. 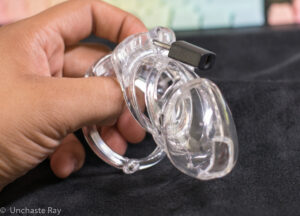 I fully understand that The Vice is meant to be a one-size-fits-all. Through my first couple of test fits, I really wish it wasn’t [one-size-fits-all]. The capture ring and the spacer go on fine. I mainly had trouble putting the cage on—a little bit too much pinching. This happened for two reasons: I am uncircumcised and because this tube has lots of openings compared to a more closed tube like the HTv2 or the CB-6000 where the openings are near the tip of the cage. The pinching problem left me with only two options to put on the cage: use the “sock” method or use lube.

Once The Vice is on, it’s comfortable.The tube  isn’t small and I can have an erection in the tube without too much discomfort (still just a bit). For a chastity device, this isn’t really a good thing. An ideal chastity device should be snug to fit a flaccid penis. A good device should try to suppress erections. Some devices do this by causing pain. Other devices simply have smaller tubes and rings. In the department of actively suppressing erections, The Vice doesn’t perform too well here. One thing however that this device has going [in terms of erection suppression] is the anti-pullout. Which I’ll be talking about next…

The anti-pullout device is something that you didn’t know that you needed, until you have it. The way that it works is that it acts a bit like sandpaper. The sandpaper texture of the plastic  does a really good job of keeping the penis in place. I tried my best to defeat the device in any way possible. With the anti-pullout enabled, I found it near impossible to escape. Even when my penis was at its most flaccid state, I simply found it impossible to get my penis out of the tube. Note: I was able to escape the device with help. Using lubricant defeats the whole point of the sandpaper texture. The manufacturer’s website suggests to wear it for a long period of time before the sandpaper effect kicks in. I found that this was true as I wore it longer; but I also got the full sandpaper effect right away.

I previously stated that an idea chastity device should be snug enough to fit a flaccid penis. The Vice is definitely too large for me when I’m flaccid. When I am erect, my penis is larger than the tube, but it’s not uncomfortable to the point where I feel that my erection is suppressed. For a chastity device meant to be worn long-term, this isn’t ideal. Throughout my use of this device, I was able to have my erections like normal. At many points during my sessions, it just didn’t feel like I was wearing anything at all. Contrast this to the Holy Trainer v2 (pictured below): the Holy Trainer definitely discourages erections and keeps the penis under a stricter lock and key. 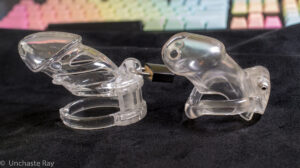 Did I like The Vice? YES! I thoroughly enjoyed my experience with it. I see myself using The Vice more for short-term use.  Although I consider myself trustworthy, I do like that the anti-pullout was included. I really wish that Locked in Lust had more than one size. It is somewhat of a standard as seen with the CB series (regular and short) and the Holy Trainer series (regular and short). I was not able to break my record of longest-chastity-session since I was only able to wear this device for under a week  and found that it was more suitable for short-term use [for me]. This was the case for me because the tube was too large for my flaccid penis. The overall fit wasn’t snug for me. Obviously everyone’s anatomy is different and your results may vary. Because I am more willing to use the device for short-term use, different pull-out attachments would be a neat thing to have. I would very much like to see spikes for pain-play.

I would highly recommend this device to someone starting to venture out in chastity play. The fact that all of the spacers and rings are included is great. It really is a great value for your money if you’re buying your first chastity device. For beginners thinking about buying the CB-6000, don’t. Buy The Vice instead as you’ll get more value out of your dollar.

Use code UNCHASTE to receive $20 off your order of The Vice! 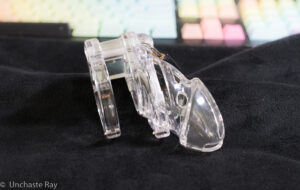