As I mentioned in my previous review of the Holy Trainer, a chastity device is great if you want to prevent access to your genitals. If you’re in a D/s relationship or like playing with orgasm denial, getting a chastity device is a must. If you are in a relationship, wearing the device relinquishes control to someone else—whoever has the key. In long-term use sessions, the wearer tends to be more pliable and is usually willing to do almost anything to get out. Now, I understand that not everyone has a partner to play with; in this case, solo play is definitely possible. Some options available are putting the key in the freezer (in a block of ice), locking the key in a time-controlled safe, or other creative means.

The HolyTrainer v3 was given to me free of charge by the HolyTrainer team for review purposes. This doesn’t affect my opinion in any way. Thank you HolyTrainer!

To get started, one common piece of advice I hear get thrown around is to buy knock-off or low-quality-made chastity devices. This is so that one can experiment and demo chastity to see if that’s something they might want to get into. These low-quality devices aren’t meant to be used for long periods of time; it is at this point that one must decide if they want to invest in a more serious chastity device. If we’re looking at fully-custom chastity devices, these types of devices start at $300 USD and much higher. For those not wanting to spend that much, an excellent middle-ground would be an off-the-shelf chastity device. In this case, the HolyTrainer v3 is that device.

I have said it before, and I will say it again—off-the-shelf devices aren’t perfect fits. Although with the v3 comes more sizes of tubes in rings, there might be fringe cases where the fit might not be ideal. With that being said, it is rare to not be able to find your own size, empirically.

Off-the-shelf devices are not perfect fits! Make sure you do your best to get your measurements correct the first time!

As the name implies, the v3 refers to the 3rd iteration of the HolyTrainer line. Whenever I hear of a “newer” model, I always expect it to be an upgrade. With this new model of the HolyTrainer, I see it as almost the same as the v2, just stealthier. 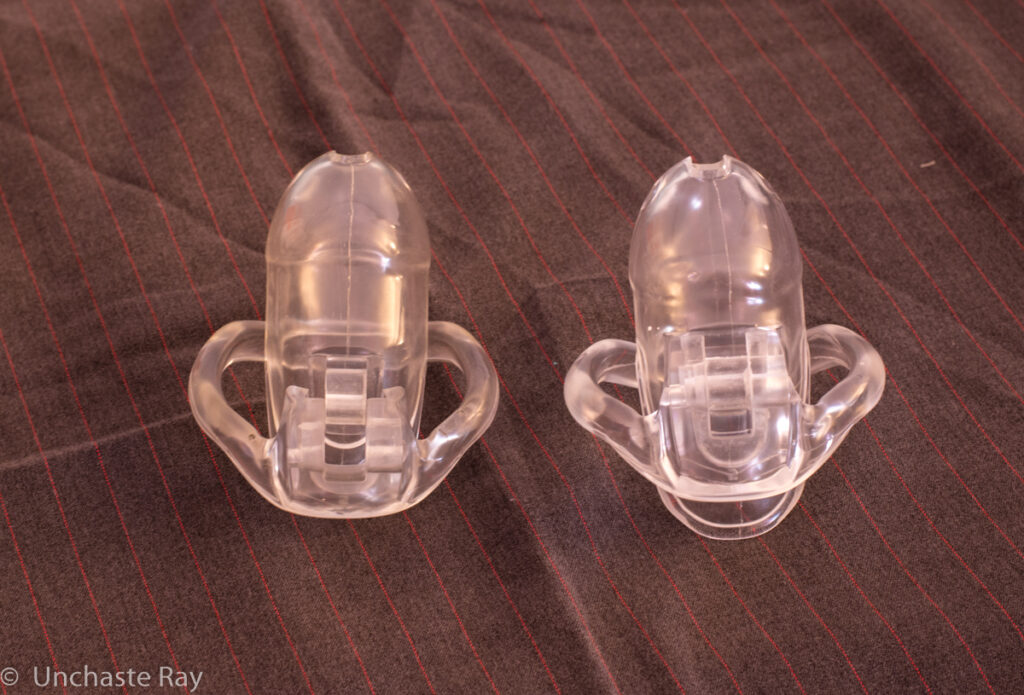 Cost. The Holy Trainer v3 is about the same price as the previous version. It is almost the same price as any other high-end sex toy. The plastic feels super strong—I feel like if I hit it with a hammer, the hammer would end up breaking. This device as well as the previous generation is made from a bio-resin. What does this mean? As opposed to knock-off devices which are made out of petroleum-based plastics, this device is made from all plant-based resins. These bio-resins are non-toxic, renewable, and solvent-free.

Just by looking at it and fitting it together, one can see that this device feels a bit smaller in your hand. What’s actually happening is the ring sits closer to the front than it does in the v2 model. The tube is approximately the same length in both versions, but the ring sitting closer to the front means that less of it sticks out.

One thing that almost everyone says about chastity devices is that they should be as snug of a fit as possible. Because of this, I opted to go with the short version to ensure the snuggest fit. Comparing the short version of the HolyTrainer v2 to the new v3, the newest v3 appears to be smaller. Since the tube is made to be stealthy, there is more pointing down from the body. 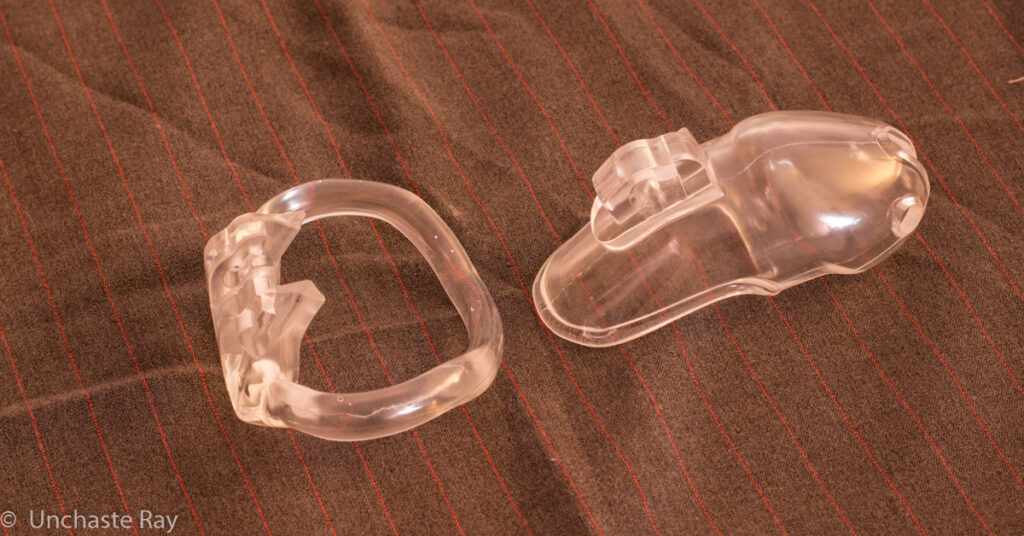 This thing feels much smaller than the v2. According to the site, the measurements are almost the same! But looking at it in my hands, the ring feels smaller and the tube feels tighter when wearing the device. Just with this little bit of experience, if you are in between sizes when measuring, go with the larger size. It’s okay to be snug, but you don’t want it to be so tight that you cut off circulation or make it too uncomfortable to wear.

…if you are in between sizes when measuring, go with the larger size.

I say that it indeed feels smaller because compared to my HolyTrainer v2 with the same size ring (50mm), it feels significantly tighter. Part of it is the fact that my penis is pointed down more, but it’s also the tube being further “in the body” that makes it feel tight as well. In my opinion, I would say that it would feel safer to go with the larger ring, though your mileage may vary.

As I’ve previously mentioned before, a test to know if it’s a good device for long-term use is to see if one is able to sleep comfortably while wearing the device. I’m happy to report that this device passes that test with flying colors.

Just like the previous generation, this chastity device feels amazingly stealthy. Once I’m wearing it and I’ve given myself a bit of time to get accustomed to it, it feels so out-of-the-way that I forget I’m wearing it at times. With chastity devices, that’s definitely the ideal scenario—to be able to wear it without knowing it’s there. Especially when wearing it for days at a time.

I love to wear chastity devices for a long time. I know that some users are only into wearing it for hours at a time, but I find it thrilling to go on about my day wearing it without having anyone know about it. The lack of a padlock is the greatest thing in chastity ever made. Since stealth happens to be the main topic of the version 3, the lack of any noise while walking is a necessary thing to have. On top of that, there is no noticeable bulge from the outside. No one except the wearer will ever know that they’re wearing it.

Getting erect while wearing the device isn’t too comfortable. Not in a this-device-is-bad kind of way, but a oh-crap-im-locked. It’s not painful, but you’ll instantly be aware that you’re locked up if you have forgotten about it throughout the day. But guess what though: You are not getting out.

You are not getting out.

Because I have the “short” version, there’s very little room to grow after becoming erect. What happens is that the cage will be pushed away from my body causing a bit of pain. The scrotum tends to burden the pain of being pulled if I get erect for too long. It isn’t a problem most of the time though. 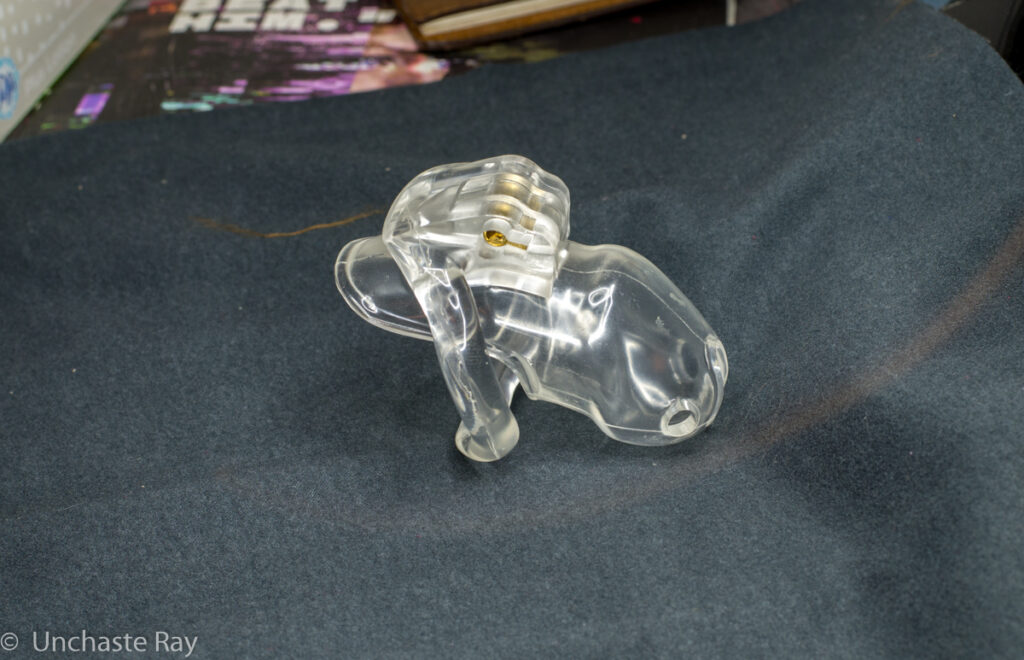 It is almost impossible to escape out of the Holy Trainer. Like I said, getting the right fit means that you’ll be comfortable, but it also means that you won’t be getting out. Even getting as flaccid as I can, it is super difficult to get out—almost impossible. I won’t say that it is impossible though; some people are growers, not show-ers and I feel like those people could escape if they set their mind to it. Personally though, I haven’t been able to escape it at all.

The lock used in this device should be the standard for all other chastity devices. The lack of a padlock means no rattling around when walking; on top of that, there is no bulge from this would-be lock. Once the device is locked, the entire thing feels solid. Can it be locked picked? Probably, though it’s not like those cheap foreign-made locks that open up with a simple pin being jammed inside. This lock is built rock-solid and looks like it requires special tools to be lock-picked.

Cleanliness was my huge problem with the version 2 and it still remains a problem in this version. The fact that the tube covers the entire penis doesn’t help in maintaining hygiene. If I try to urinate while wearing the HolyTrainer, I have to sit down. Sitting is a requirement. Otherwise, a mess will be made. Just like with the v2, I try to line up my penis with the hole made for urination, but some urine will always be leaked in the tube. For this purpose, I still carry a some cotton swabs and a squirty bottle to help clean up while I’m away from home.

If you choose to forgo swabs and/or the squirty bottle, you will have a bad time. It will lead to a very unhygienic device and a very unpleasant-smelling groin area.

Though it is entirely possible to shower while wearing the device, water doesn’t get in everywhere. It is best to take off the device completely every other day or so in order to maintain top cleanliness. If this is an issue and you really want to go as long as possible without taking the chastity device, a fully-custom open metal device is your best bet.

The HolyTrainer v3 is probably one of the greatest off-the-shelf chastity device. It has an overall super comfortable fit that isn’t found in other cheaper off-the-shelf devices. During long-term wear, no one can tell that I’m wearing a chastity device. Although it is not something that I would wear for multiple weeks or months at a time, it is a device that I can wear for multiple days at a time. If I do want to wear it for weeks, I’ll have to take short breaks in between. This device is something that I enjoy wearing; it’s just so convenient and easy. If you are someone that wants to buy a super comfortable device but don’t want to shell out $300+ for a custom device, the Holy Trainer is the device for you.

The HolyTrainer v3 comes in a variety of colors. Some people love the idea of opaque colors as it obscures the wearer’s view of their own penis. On this page, you can see the variety of custom colors that have been done for customers in the past. If you can imagine a color, the HolyTrainer team can probably make your dream come true.